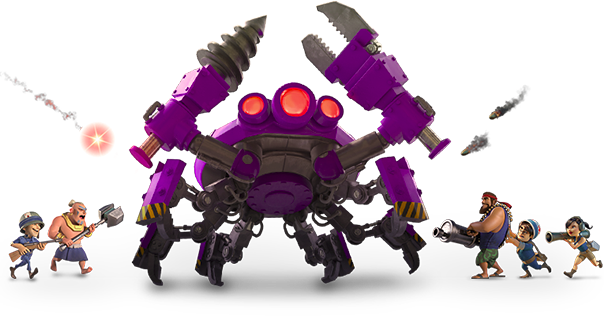 How to Beat Mega Crabs in Boom Beach

Mega Crab is a massive superstructure. It is the brainchild of the infamous and notorious Dr. T. It is a megastructure that sprouts out of the ocean surface and poses a threat to the peace of your archipielago. The artificial island has an odd shape that often resembles, you guessed it, a CRAB!

The Mega Crab has an infinite number of levels and you can skim through them to gather loot and trophies. The mega crab makes a random appearance, which is apparently by design and is the doing of Dr. T himself.

The base can offer a host of items as rewards, including(but not limited to) Resources, Power Stones and rare coveted items such as Power Powder and Prototype Modules. You start off the series of attacks on the base with 3 attacks. You earn one attack every two and a half hours and another one, each time you complete a level. You can store upto eight attacks at once.

The base is defended by a host of defences, which can even include unreleased prototypes. One of the interesting features is the presence of certain traps that you can use to your advantage. These are the Critter Container, Speed Serums and Cryo Bombs.

Tips to beat the Mega Crab

The objective you should keep in mind while attacking the Mega Crab, just like attacking any other base, should be to get as far as you can as soon as you can. Here is a list of tips specific to help you do just that: