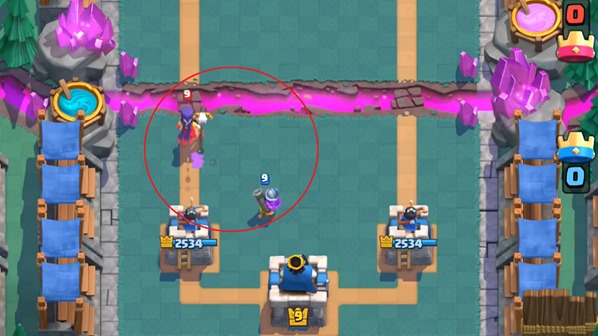 How to Counter Witch in Clash Royale

What is the Witch card?

The Witch is an epic card and by category, a troop card. This is unlocked when you achieve Spell Valley in the trophy road. It consumes 5 elixirs to deploy. Its main attack stream is splashing and it also produces skeletons after a few seconds which help the witch a lot. It can defend against tank troops very easily due to the skeletons.

How to counter the witch?

The witch is not that much difficult to handle but the main thing that causes distractions are the skeletons. The main advantage of the witch are the skeletons. Playing against this card needs some strategies which will be discussed below.

Spell cards can help a lot when dealing with the witch. The health of the witch is not that high. So, a mere lightning spell can be used to annihilate the witch. You can also use spells like rocket or you can use snowball if it is effective against it.

Troop cards that have the ability to splash attack can be used against the witch. The reason being is that they can damage the witch along with the skeletons and it can easily be an up-side for you. You can use some spell cards like fireball for their assistance to damage the witch more.

Simple troop cards can be used to damage the witch at a relatively high rate. You can use cards like knight, musketeer etc. This will help you to destroy the skeletons and as the damage rate of these troops is high, they can easily damage the witch.

How to use the witch in an effective way?